For 21 months I had the perfect child. True, Eva was a monster baby and gained an amazing amount of weight every week. I remember going into breast feeding support group and saying, “She gained 10 ounces this week” and mothers jaws dropping. At one point a mom asked, “Are you hungry all the time? I mean all the times you’re hungry, yes?” From the beginning she was an overachiever. She was a little late in rolling but I was assured that was normal for children with large…fat reserves. Once she started rolling over she never looked back. She went from crawling to walking within two weeks time. She went from walking to running in no time without looking back. Even now she jumps in the air with plenty of air between her and the ground.

During the first year and half all your child’s milestones are judged in physical milestones. Every single milestone Eva has met and been very successful at. Of course I was a first time mother who worried herself sick with every single one thinking she was late for everything. Looking back, she wasn’t late at all. She was right on time for Eva and I should have never doubted her. We started going to a gym class back in September. In her gym class were a lot of other little ones around Eva’s age. I started noticing more and more that these kids were saying a lot more words than Eva.

I tried to let my attitude of Eva taking her time to achieve things shine through. Every month though that light kept getting dimmer. I have an amazing group of mom friends here in Exeter. These women and kiddos that I call the Baby Gang. They were posting videos or telling me stories about the funny things their babes were saying. I realized that I didn’t really have those stories. I had funny, “Eva did this with her food the other day” stories but no, “Eva said the funniest thing yesterday” stories. At first I was just trying to give her the time and patience to let talk to me when she wanted to. As more and more time passed that patience became worry. That worry became denial. That denial became blinders to the whole situation. My husband started saying more and more, “Babe, I really think we need to get some professional help here.” I wanted to throw up every time he brought it up.

Now, Eva is not non-verbal. By any means. She has some words that she can say and she can babble with the best tongues speakers. Which is great but not where she should be. At the beginning of February I finally broke down and admitted that she needed to be evaluated. Whatever it was that I was doing wasn’t working on getting her through this Hoover dam of speech. I called the numbers and by the grace of the gods got an evaluation a week later (thank you to whomever cancelled their evaluation. We are forever grateful!). I filled out a packet larger than my mortgage application and in we went. Me and two lovely evaluators sat on the floor with Eva and played with her. I was asked question after question. I felt pretty good about everything because they were impressed by Eva’s physical skills and her direction taking.

After 45 minutes I finally heard the words I was fearing, “She does qualify for speech therapy”. I almost broke down. I was told by two professionals that my daughter needed help in growing into a person. Literally my one job. I wasn’t misreading their questions and comments though. Eva’s output verbal was at 11-13 months but her receptive verbal was 21-27 months. She could understand at a level higher than her age but couldn’t speak to us for her age. The most bitter sweet evaluation I’ve ever gone through. Her evaluators reassured me that they were very optimistic about therapy for Eva. She literally had all the other building blocks for her 21 months, she was only missing this top block. At the end I was putting Eva’s jacket on and I said, “Eva, can you help me?” and she put her arm through the sleeve and said, “I did it!” Needless to say, I was reassured again that they thought therapy would be effective.

Look, it’s all great. Eva was struggling with a part of her development and we decided to be proactive about it. I talked it through with Tim over and over again. I talked to my parents. I talked to my sister. I talked to my sister from another mister. I talked to the baby gang. I had to keep saying “She’s going to do speech therapy” over and over because I had to adjust and accept that idea. I feel like an enormous failure as a mother. Especially because I stay home with her. I’m the one who should be teaching her these things for life. I keep going over the last 22 months in my head. I let her watch too much TV. I let her eat too much junk food. She has too many toys. She doesn’t have enough educational toys. I didn’t read her the New York Times enough as a baby. I didn’t talk to her enough through her life. I wasn’t enough. I’m not enough for her.

Accepting that your child isn’t perfect in the sense of she will never need outside help is a hard pill to swallow. It needs a choking hazard warning. I’ve tried my best. I’ve re-framed 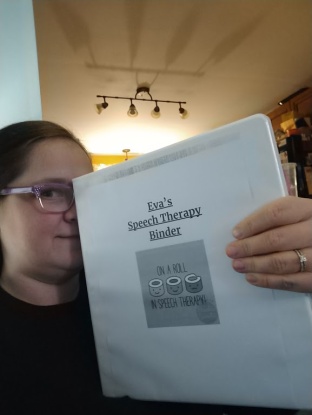 it in my mindset of, if she was struggling in math at school we would get her a tutor. She’s getting a tutor for speech. That’s all. Tim and I have readjusted the way we try to help her with words. Apparently we raised an extremely independent kid who was probably frustrated with us trying to force her to talk and wanted to do it her way. So again, my fault. I let her roll away from me, that’s where this all started. I’ve even made a speech therapy binder for her to keep all the paperwork paperwork paperwork. I’m trying hard here, guys.

We had our first therapy appointment this past Wednesday. It was fine. It was to see where Eva was and get her used to her speech therapist. Eva was mostly excited to play with new toys. Here’s what I learned from therapy, again. I need to let go. I need to let Eva get there in her time. I need to stop doubting her and myself. She will talk. She will communicate. I need to be gentle with myself and realize I’ve given the her all the other building blocks and some extras. I need to trust Tim when he says that Eva’s perfect the way she is and so are we. I need to just be. I once again am learning I can’t control everything and that’s okay. I tell Eva all the time that things don’t go the way we want, and that’s okay. In fact, that’s called life.