When I became pregnant I wrote a blog post about what I did and did not want to do as a mom. I had 12 points that I was worried about in becoming a new mom. Number four was bullet pointed “Letting them think that I think having a clean house is more important than they are.” Well, let’s just say that this bullet point has been proven true over and over and over…and over again since Eva was born. At first our house was a disaster area and I chalked it up to the fact that we had a newborn baby running the show. Everything else fell by the wayside down a ditch and in a river downhill from a toxic plant. It was bad.

Then a great thing happened. I was able to clean one room and then the other and another. It was as if Hygieia came off Mount Olympus and touched me during the night. It made me feel so much better. I had a touch of PPD after having my beautiful little Raptor. A big part of my anxiety was my mess of a house. I felt as though I was being a lazy mom and a wife that didn’t care about her house anymore. I knew so many moms that had babies the same age as my little one or younger. What was my issue? Why couldn’t I get it together? I already felt as though I was drowning in a sea of burp clothes and the feeling that I was personally never going to be enough for Eva, Tim, or myself.

Then months went by and things started piling up and out again. The kitchen dishes were monstrous. The laundry seemed to touch the ceiling. The dust bunnies were planning a coup under the couch. The anxiety started creeping back in. I dreaded waking up because I knew the second I opened my eyes I was just staring messes in the face and they weren’t messes that my child made, they were my messes. It was getting to be too much. I did what I should have done weeks beforehand. I talked to my husband. I explained to Tim that it was all beginning to be too much. I felt like whatever I was doing was never enough. I’m lucky that my husband actually listened to me and told me that he would take over kitchen duties after dinner so we didn’t have to wake up to dirty dishes in the morning. This helped a lot.

In what seemed like the inevitable our house is still a mess even today. Tim was doing great in the kitchen and I was able to stay on top of toys through the house and vacuuming the big chunks every night. Then summer started and we got super busy. Then Eva decided that sleeping when it was even a little light out was for the birds, she is a reverse vampire. Eva and I started doing more activities during the day. It never seemed like I had enough energy at the end of the day. I would look at all the toys around the living room at night and think, “Why bother? She’s going to take all of them out again in 10 hours.” At least we had proof that our child at least touches every single toy at least once a day even if it’s to toss it out of the way of another toy. 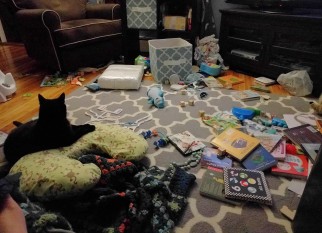 I think it was about last week that I finally thought, “I’m a messy mom and I need to be okay with that.”

I tell Eva constantly that life isn’t here to service us all the time and she needs to be okay with that. I’m sure there are moms or dads out there who would argue that housework is part of taking care of your child. That a clean house was needed to have a constructive child. Sure we all have messes every day but cleaning them at the end of the day it was important to have a house in order. I remember going to a friend’s house after she had a baby six months after me. Her house looked like my house after I spent three days cleaning because we had family coming over for dinner. I didn’t understand what gene I was missing that my friend clearly got.

Of course there are also parents who will argue for me and say that raising children is insanely hard and if you can make it to an end of the day who cares? Which I do totally agree with because I didn’t understand what it meant to just make it to the end of the day until I had a toddler. With a newborn time isn’t known so days meld together. A toddler at least has some sort of schedule so days do come to an end. If a clean house is your biggest concern of the day then you’ve had a pretty good day.

I’d love to end this blog post saying that I’ve embraced that idea that I’m a messy mom and that’s okay. When I’m falling asleep on the couch at 8 pm and ache from running after a 15 month old all day I can fully embrace this philosophy. Then the morning comes and I feel a little more refreshed and the daylight shows far more than the night time. I see Eva walking across the toy coal walk in the living room to get to her books. I have to move dirty dishes to be able to make breakfast in the kitchen. I kick shoes out of the way to get us out the door. Then the philosophy becomes a little harder. All I know is I’m trying my best. I’m trying to be a good and entertaining mom to Eva. I’m trying to be a supportive partner to my husband. I’m a messy mom but I hope to one day be a “There’s only big chunks around” mom.